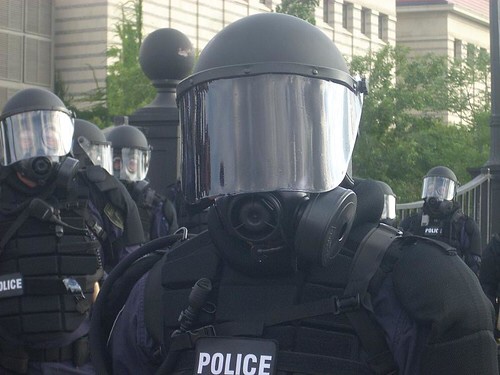 Claiming it’s PPE to prevent the spread of COVID-19, thousands of fully equipped police officers in riot gear have been seen marching in low income neighborhoods around Minneapolis, for no particular reason whatsoever.

“My wife made it,” said Sergeant Eric Splatz, pointing to the kevlar wrapped breastplate he was wearing while harmlessly patrolling his beat. “She sewed it, along with the flower printed jackboots, and a little satchel for me to carry my ammunition magazines for this M-16. It’s really cute.”

Doing their job on this normal day like every other day since nothing terrible whatsoever recently happened, the cops were seen holding hands and skipping through the sidewalks of minority neighborhoods where they are most definitely welcome all the time and certainly get along with everyone perfectly fine thank you for asking. Why wouldn’t they?

“Everything’s great!” screamed officer Mike Krepwitz. “It’s fine! It’s super great! My kids won’t talk to me! I have to sleep in my body armor to fall asleep every night. That’s why I’m a hero. It’s the appreciation from the citizens that really makes it worthwhile. The way they call us war criminals for stomping on human rights lets me know they care.”

It sure is great being a police officer, with no shenanigans to worry about whatsoever from any co-workers, since all cops are inherently good and beautiful and nice and also brave everyday forever.

“The shield and billy club is for the virus,” says Splatz. “You can’t be too careful with this stuff. The tear gas is also there to disinfect the air, for your safety, since the virus does spread through the atmosphere. Sometimes the coronavirus thinks you went too far, and then it comes back to march in the street just because one of your other officers might have gone a little off the handle the other day, things might have gotten a little crazy.” Immediately after this interview, Sergeant Splatz was hit by a bus.

Luckily that’s nothing to worry about, since full riot gear just happens to be in vogue this summer, that’s all. Minneapolis’ finest is just chasing the haute couture for the coming season, which surely looks forward to friendship and camaraderie nationwide.